Arsenal have reportedly added a familiar name to their list of midfield targets this summer. Lyon star Bruno Guimaraes was linked with Arsenal a couple of years ago before he moved to the Ligue 1 club. The Gunners are now claimed to once again be interested in the Brazilian.

The report says Lyon need money after failing to qualify for the Champions League last season.

However, they would not accept a fee any lower than £30million (€35m).

Arsenal are set to spend £50m on Ben White so may have to think of other ways to fund a deal.

Express Sport picks four players Arsenal could look to use as part of a swap deal for Guimaraes. 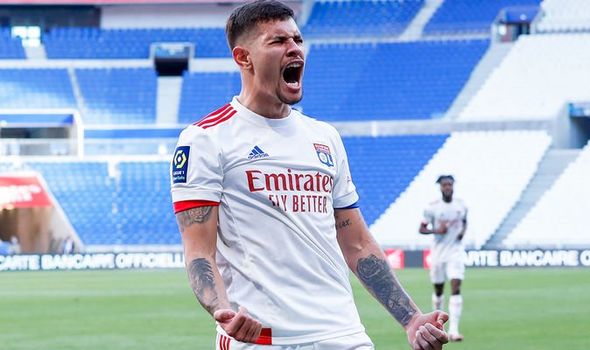 Lacazette is an incredibly familiar name to the fans of Lyon.

The striker came through the academy with the French side and spent seven years in the first team before leaving for Arsenal in 2017.

Lacazette has entered the final year of his contract with the Gunners and appears unlikely to be offered an extension.

It could be a move that works for everyone.

Maitland-Niles’ future at Arsenal is in doubt after spending the second half of last season on loan at West Brom.

He is unlikely to get many opportunities in his preferred midfield role under Arteta.

Reports say Monaco have shown an interest in Maitland-Niles, so the French market knows of his talent.

His versatility could be an attraction to Lyon.

With Bukayo Saka, Nicolas Pepe and Gabriel Martinelli all ahead of him, Nelson could look to move elsewhere for more game time.

The 21-year-old was highly-rated when in the academy at Arsenal but has failed to kick on so far.

A change of scenery could be exactly what he needs to fulfil his potential.

Torreira is somewhat a forgotten man at Arsenal.

The midfielder had a fine first season at the club under Unai Emery but fell out of favour under Mikel Arteta.

His loan at Atletico Madrid was not successful on a personal level, despite winning the La Liga title.

Torreira’s future looks to be anywhere apart from Arsenal right now so the Gunners could attempt to throw him into a deal for a similar type of player in Guimaraes.