The name Samson Tijani is somewhat of an obscurity around European football, but is already a household name amongst supporters of Nigerian football.

However, given the talent and promise on show, that might change drastically in the near future.

Tijani was part of the Nigeria side that competed at the U-17 Africa Cup of Nations in Tanzania, where they finished fourth and qualified for the 2019 FIFA U-17 World Cup. Tijani has already demonstrated his leadership capabilities on an international stage after captaining Nigeria’s U17 Golden Eaglets in the 2019 U-17 World Cup.

During Nigeria’s World Cup campaign in Brazil, the 19-year-old played every minute of the tournament and produced a man-of-the-match display in their first group game by scoring a brace in the 4-2 victory over Hungary. He also lead the team to the semi-finals at the U17 Africa Cup of Nations and another MOTM performance against Angola further underlined his all-round qualities. 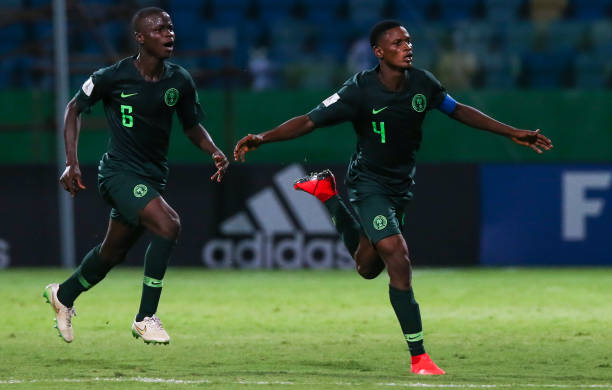 The prodigious talent had well and truly announced himself on a global stage, and Europe was quick to take notice.
Having honed his talents at Lagos-based Collins Edwin Sports Club, Tijani was targeted by many top European sides until he made a smart decision in signing a five-year deal with the Austrian giants.

Tijani chose to begin his European campaign at the Red Bull Arena, where he has the opportunity to play top-level football in the Champions League. Yet, Tijani would be able to develop with world class facilities in a less-pressured environment giving him the proper ingredients to soar.

The midfielder was quickly loaned by RB Salzburg to fellow Austrian Bundesliga side Hartberg where he made his senior career debut.

Tijani appeared 18 times and debuted for the senior Nigeria national team in a friendly 1-0 loss to Algeria in October 2020.

Reacting to his call-up at the time, Tijani revealed he had no contact at all with Gernot Rohr and it was evident he was selected based on pure merit, which he obviously deserves. Speaking back in September 2020, the talented youngster was quoted to have said: “I feel good about being invited but I didn’t expect the call-up because I just moved to Europe,” Tijani said. “It was amazing when I came to Europe, I didn’t even play in the academy, went directly to the first team. “When I was sent on loan, I went straight to the starting lineup, I have played all the games.”

“It is amazing starting all the four matches, thank God for everything”.

He was also called up to the recent post-season friendlies against Cameroon; his emergence has been no fluke.

What has been said about Tijani

Still only 19, his best years are ahead of him and he’s already looking like a proper player for the future. While Leicester City star Wilfried Ndidi has made the holding defensive-midfield role his own, an able replacement with potential to be better in Samson Tijani is already lying in wait. Back in October 2020, Ndidi had to pull out of the Super Eagles’ games against Ivory Coast and Tunisia in Austria, following a groin injury he sustained.

While there was much debate regarding who should replace the influential midfielder, it was surprising and yet not surprising to see a young Tijani mentioned in the fray.

Commenting on Ndidi’s absence at the time, Kennedy Boboye, coach of NPFL side Awka United was among those who called for the teenager to be given a run in that role.

“Ndidi should be the only player actually playing that position in the national team. If he is injured, I think we should have a better replacement. The coaches working with them know,” Boboye said to Goal.

“That position is where Oghenekaro Etebo has been played in more than three games for Nigeria so he can fill the void as usual.

“We have Samson Tijani, the Golden Eaglets captain who is playing regularly for his club in Europe and he is a better replacement if Ndidi is not there, though he might lack the experience. The advantage is that he’s playing at his club and they can give him a guideline.”

With more experience to come under his belt in the coming years, it’s easy to see that Tijani would be a mainstay n the Super Eagles midfield for the next decade to come.

The future is bright for the talented youngster

Still only a teenager but he is already playing with calm and maturity far above his age. It was a season of learning for the pint-sized defensive midfielder as modest Hartberg finished seventh in the top flight. Should he keep up this trajectory, Tijani would be on many lips around world football for years to come.

While he will be aiming to impress in his natural defensive midfield role, his versatility makes him even more of an asset for club and country. The 19-year-old can also play further up and centrally in the heart of the midfield, while also boasting the tactical skill-set to play as a centre-back.

For the most part, the talented teenager will be hoping to follow in the footsteps of world-renowned players who developed their game in Salzburg. Especially African duo Naby Keita and Sadio Mane.

Pertinently, he would be looking to impress the new manager as Jesse Marsch moves to RB Leipzig this summer. The 2021/22 season might already have its new kid on the block.