Former Arsenal striker Kevin Campbell has told the Gunners to consider the possibility of signing Inter Milan defender Achraf Hakimi in the summer transfer window. Technical director Edu is said to be in the market for a new right-back ahead of next season, with Hector Bellerin’s future far from certain amid continued speculation linking him with a summer exit.

Hakimi has impressed throughout his debut season with Inter, featuring in all but one of his side’s Serie A matches and helping to keep eight clean sheets in the process.

He was signed from Real Madrid during pre-season and has lived up to every penny of the £36million fee exchanged in order to secure his services.

Arsenal have reportedly identified the 22-year-old as a target ahead of the summer amid the possibility of an exit for Bellerin, who is being eyed by a number of clubs on the continent.

Barcelona and Paris-Saint Germain have been mentioned in connection with the Spaniard in recent months, while two unnamed Italian sides are also said to be keen.

Although Mikel Arteta will be hoping to keep hold of Bellerin into next season and beyond, the club appear to have already begun preparations to land his replacement. 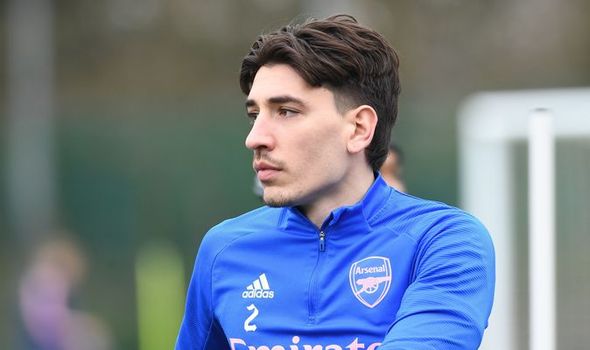 Campbell, who scored 46 goals for Arsenal during an eight-year spell at the club, has urged his former employers to launch a full-blooded approach for Hakimi, suggesting that Inter will be determined to retain their prized asset.

“Arsenal are in the market for a right-back and Hakimi is a brilliant player,” Campbell told Football Insider.

“I think the club will tread very carefully when they look who to sign this summer. Will Inter Milan even sell Hakimi? They are looking great.

“Going after players that are performing at the peak is always difficult. If the club see him as the best choice, though, they have got to go all out for him.”

Bellerin remains under contract with Arsenal until the summer of 2023, but is approaching his 11th year with the Gunners and could seek a new challenge at the end of the season.

Hakimi would almost certainly offer an upgrade on the Spaniard, but it remains to be seen whether Inter would be prepared to part ways with the defender at any price.

His agent Alejandro Camano suggested earlier this week that Hakimi is more than happy with his current situation, claiming that he has been given the platform to thrive by Antonio Conte and his five-at-the-back system which relies heavily on attacking wing-backs.

“He feels good at Inter with Conte, who is a great coach,” said Camano.

“His [Conte’s] game exalts Achraf and I think he will perform much better with this experience at the Nerazzurri.”

Hakimi has made 34 appearances for Inter in all competitions since joining the club at the start of the campaign.

He failed to break into the Real Madrid side under Zinedine Zidane but excelled during a two-year loan spell with Borussia Dortmund.

The Morocco international is known for his formidable attacking threat, with the full-back thriving when deployed to make penetrating runs on the overlap in order to create chances from wide positions.

Potential Bellerin replacement ‘happy’ at current club according to agent