Arsenal are currently “working on” signing a new centre-back according to transfer expert Fabrizio Romano. Mikel Arteta is known to want to strengthen the centre of his defence despite having multiple options in the position already.

William Saliba will also join Arteta’s squad for next season after a year on loan at Saint-Etienne, where Arsenal bought him from for £27million last summer.

Yet Mustafi, Sokratis and Mavropanos could all be sold to free up both funds and room for new additions, with it expected Saliba will play a key role next term.

Mari, on loan from Flamengo, is expected to be signed permanently for £8m at the end of the current campaign while Luiz could have the one-year option in his contract triggered to keep him at the Emirates until 2022.

Yet amid the turnover, Arsenal boss Arteta is keen to land another centre-half – even with 19-year-old Saliba’s arrival.

Luiz turns 33 next month while Chambers will be out of the team until the closing months of 2020, while Holding is similarly still making his way back to 100 per cent after a lengthy knee injury.

And per Romano, Arsenal are currently working away as they seek to sign a new central defender to strengthen their options for next season.

Dayot Upamecano is the big-money target while Chris Smalling, John Stones, Evan N’Dicka and Chris Richards among the many names linked to the north London club.

Arteta is said to be a big fan of Upamecano but whether Arsenal can muster the funds to prise him from RB Leipzig is another matter.

The Gunners boss also wants fresh blood in midfield and has been linked with forwards such as Odsonne Edouard of Celtic as he looks to rebuild the team, with a centre-back seemingly the first piece of the puzzle. 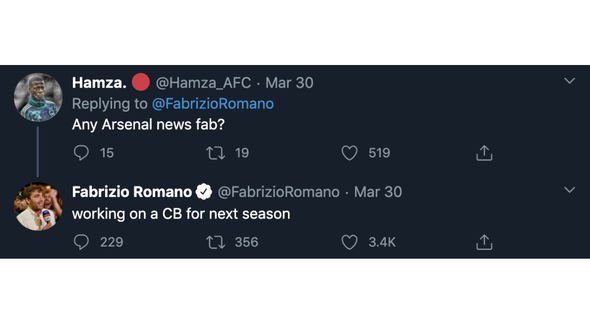 “I do feel that Arsenal have hung back from that lately, in terms of the intense pressing.

“The reason is, they can’t squeeze up as high as they want because they don’t have the speed at centre-half that they need, so definitely an athletic central defender will surely come on board.”

While former Arsenal defender Bacary Sagna has high hopes for the incoming Saliba.

The Frenchman told Goal of his compatriot: “First he will need to adapt to English football. He is a big prospect for the future but Arsenal need him to perform as soon as he starts.

“He is aware of that probably, but he has a lot of qualities and he will learn fast. Hopefully he will achieve good things and become one of the best centre-backs in the league.

“He is very confident in defending, he is not afraid to defend one against one and most of the time he wins the duels, which is the best quality as a defender.