Arsenal will be looking to continue their fine start to the new Premier League season when they face Liverpool on Saturday.

Anfield has not been a happy hunting ground for the Gunners in recent years, they’ve suffered defeat in each of their last three visits and have conceded at least three goals on each occasion.

Make no mistake about it, after comfortable wins over Newcastle United and Burnley, this is Arsenal’s first real test of the season. Although, it’s not a decisive one.

The Reds have made an identical start to the campaign – two wins from two – but are likely to be without first-choice goalkeeper Alisson Becker once again because of injury. Meaning Adrian will continue in goal for Klopp’s men.

Arsenal will want to test the Spaniard’s nerves at every moment, especially after last weekend’s mistake which gifted Southampton a goal which ultimately proved to be a mere consolation, but could have cost Klopp two precious points.

Hector Bellerin, Kieran Tierney, Rob Holding and Konstantions Mavropanos are all set to sit out the trip to Merseyside as they recover from their respective injuries.

David Luiz made his first start for the club against Burnley and should retain his role in the lineup alongside Sokratis Papastathopoulos. Reiss Nelson and Joe Willock have started both of the opening games of the season, and Emery will find it hard to drop either at Anfield.

Nelson is the more likely of the two to make way, and Lucas Torreira could come in for some added midfield bite – but Nicolas Pepe is also in line for his first full start another impressive cameo last weekend.

Mesut Ozil missed out against Burnley due to illness, but will be back in contention. However, Dani Ceballos is likely to be handed the No.10 role again after a superb performance at the Emirates. 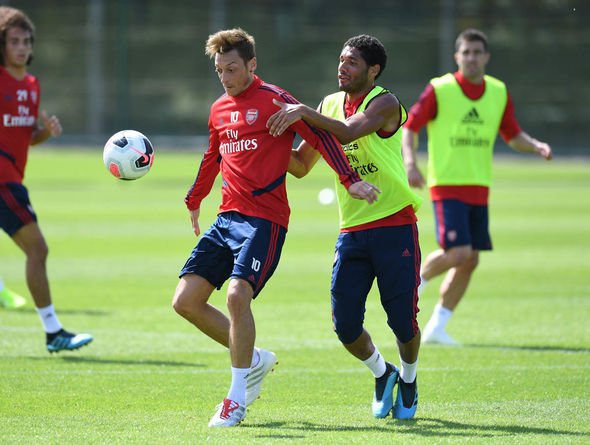 The same goes for Granit Xhaka who was deemed not fit enough to make the matchday squad last week after sustaining bruising on his lower back and leg.

In terms of a line-up, one of many decisions Unai Emery has to make is whether to stick with a 4-2-3-1 system or revert to a three at the back formation in a bid to combat Liverpool’s exciting attacking trio.

Emery is expected to stick rather than twist his tactics against such an opponent.