Moussa Dembele scored twice off the bench against Arsenal to win the Emirates Cup for Lyon.

Pierre-Emerick Aubamyeang had given the Gunners the lead just before half-time.

Ex-Celtic man, Dembele, then came on to down Unai Emery’s side at the Emirates

It was a slow start to Arsenal’s first home match of the pre-season. The Gunners are further ahead in their campaign preparations than their opponents, Lyon. But they certainly didn’t look like it with a slow start. That disappointment only increased when Alexandre Lacazette was forced off the pitch inside 13 minutes.

Reiss Nelson entered the fray and Arsenal benefitted. The returning Englishman linked up well with Pierre-Emerick Aubameyang on a number of occasions. The Gabonese forward laid the ball on a plate for Henrikh Mkhitaryan who forced a fine save out of Anthony Lopes in the Lyon goal.

But the former Dortmund pair weren’t finished. Just five minutes before halftime, Mkhitaryan crossed for Aubameyang who steered his volley into the far corner of the net.

The second half began with Arsenal on the front foot. Substitutes Eddie Nketiah and Nelson impressed with some sharp linkup play and moments of attacking flair.

But Lyon did improve in the second half and it was two former UK-based players who created the next goal. Memphis Depay found room on the left flank and crossed for the former Celtic man Moussa Dembele to head home. 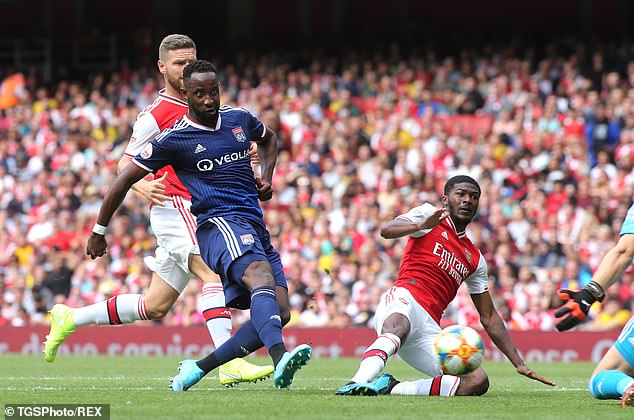 Unai Emery made a triple substitution moments later and it had an immediate impact on the match. Sub Gabriel Martinelli was the liveliest player in the box as he latched onto a loose ball to score but it was ruled out for offside.

Unfortunately for Arsenal, the offside rule went against them. Less than a minute later and Lyon were down the other end of the pitch with Dembele. The Frenchman broke the offside trap and made it 2-1 Lyon.