Gareth Bale provided Real Madrid with a timely reminder of his quality as the unwanted winger came off the bench to spearhead an International Champions Cup fightback against Arsenal.

Alexandre Lacazette and Pierre-Emerick Aubameyang put Arsenal 2-0 up in a first half which saw red cards for Nacho and Sokratis, but Real fought back after the break thanks to goals from Bale and Marco Asensio.

The match went to a penalty shootout, and Thibaut Courtois proved the master with some fine saves as Real ran out 3-2 winners with the Gunners missing three spot-kicks.

Lacazette made it one from the penalty spot after Nacho had been sent off for handball.

Few moments later, Aubameyang added a second for the Gunners before Sokratis was sent off for two booking in the space of two minutes.

With both teams fielding what appear to be their coaches’ full-strength front lines, the result was always likely to come down to which one of the weakened defences held out best.

With Luka Jovic making his full debut for Real Madrid in a three-man attack alongside Eden Hazard and Karim Benzema, Arsenal fans could be forgiven for feeling a pang of sympathy for the likes of Carl Jenkinson and goalkeeper Emi Martinez.

However, Nacho was in all sorts of trouble from the first whistle as he was lucky to escape further punishment when trying to clear the ball over his shoulder, instead catching Sead Kolasinac with a boot to the hand.

The referee took pity on him and showed no card, but it was a different story a couple of minutes later as the utility defender was given his marching orders for a deliberate handball.

Lacazette rounded Keylor Navas and tried to pull the ball back across goal – the ball hit Nacho’s hand with the defender on the floor, and though the effort wasn’t goal-bound, the official decided it was worthy of a straight red.

Real were furious, but Lacazette stepped up to score the penalty – though that had some luck about it as the spot-kick hit both posts before bouncing in past Navas, who saw the funny side of things. 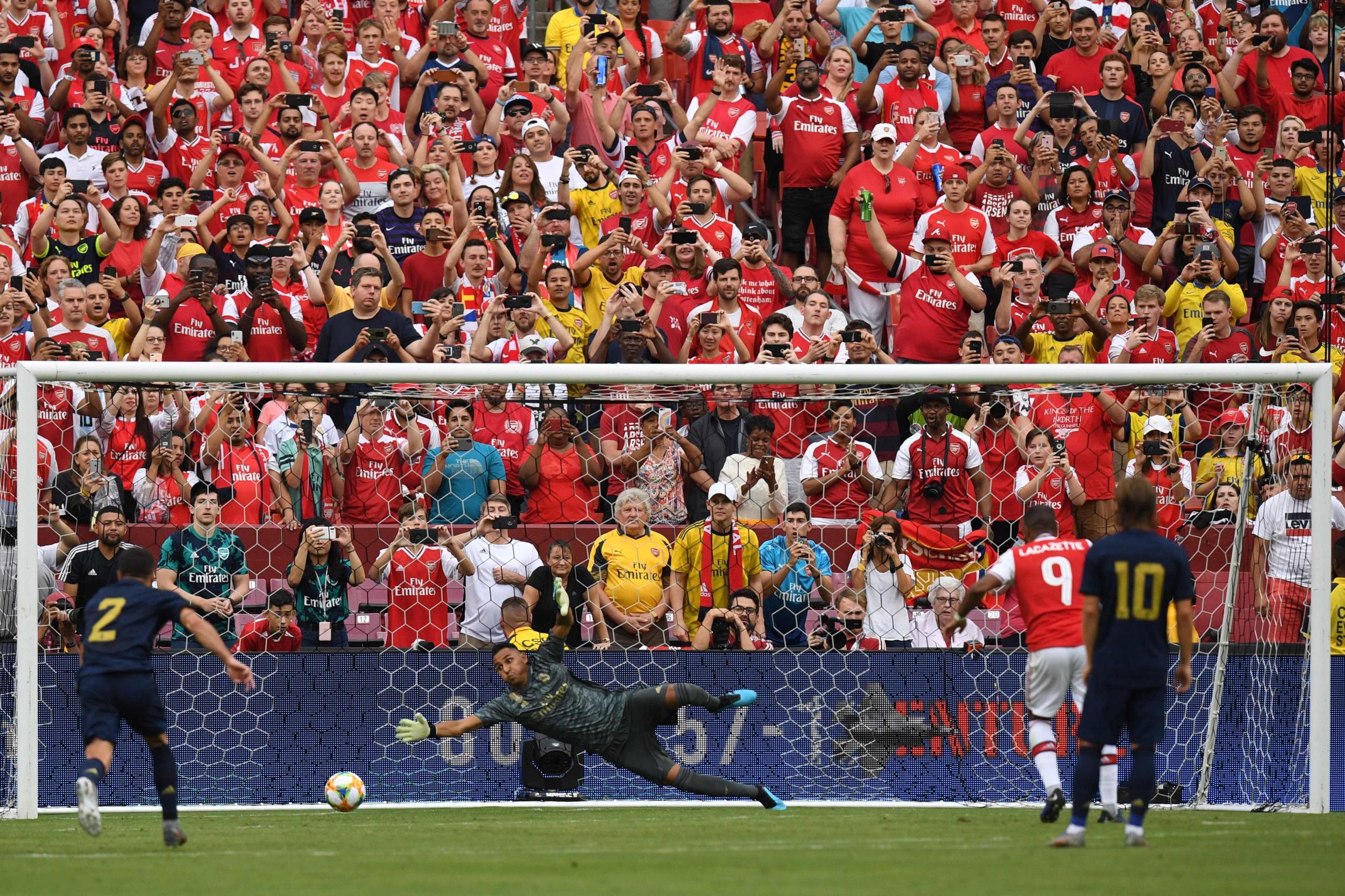 Nacho’s dismissal also spelled the end of Jovic’s game, with the forward sacrificed after just 15 minutes for Raphael Varane – but Arsenal were two goals to the good nine minutes later as Lacazette’s clever dummy allowed Aubameyang to race through and finish via a Sergio Ramos deflection.

Arsenal were sitting pretty, but Sokratis levelled things up at 10v10 with two quick cautions in succession: the Arsenal defender first took out Toni Kroos on the counter before a softer foul on Luka Modric, though he did himself no favours by reacting to the dismissal by booting the ball high up in the air in frustration.

Real rallied and Martinez was forced into a vital interception to prevent a tap-in for Benzema off a Dani Carvajal cross, and the French striker was then guilty of heading a gilt-edged chance off the post on the stroke of half-time. 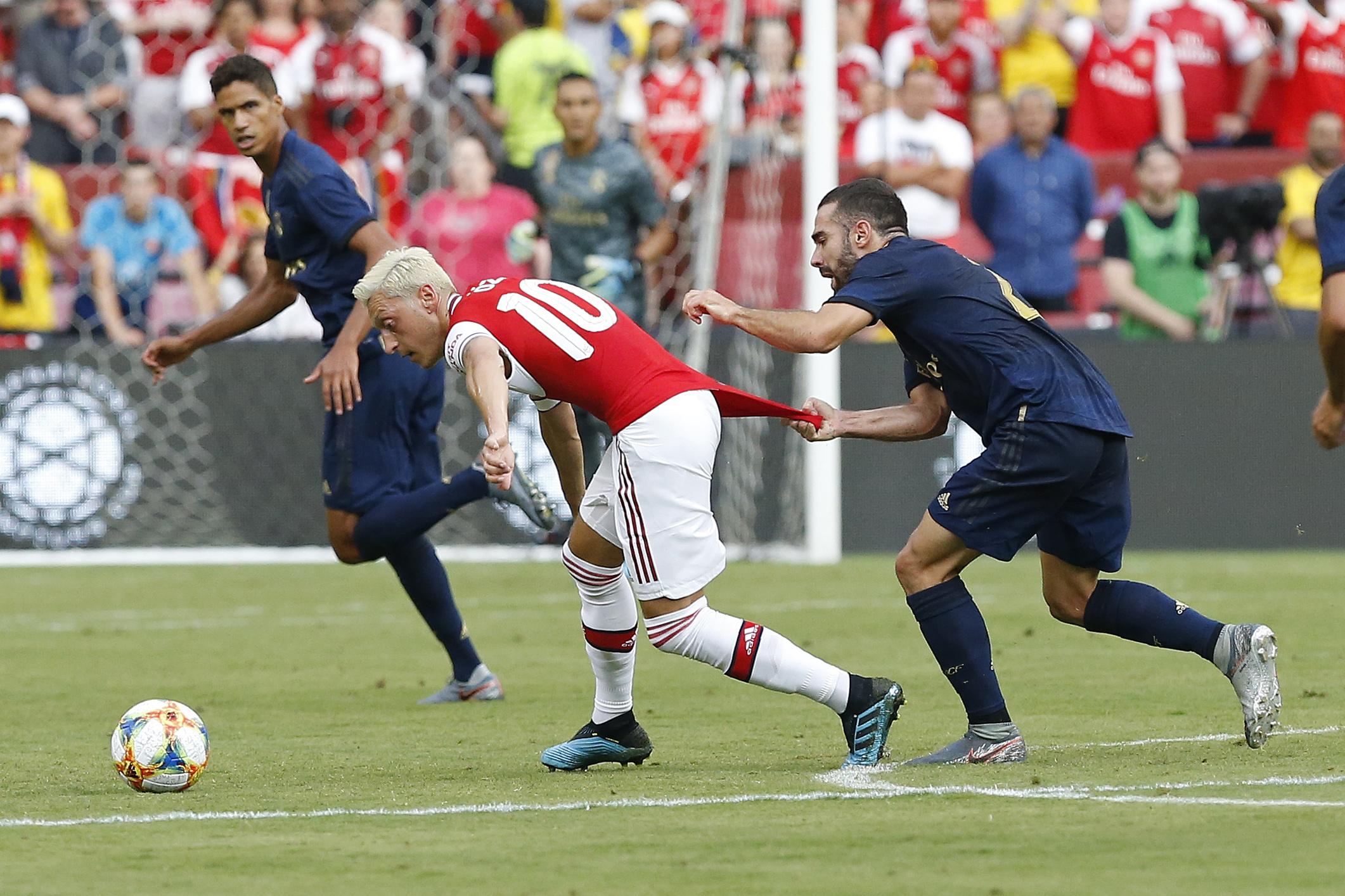 The interval brought changes for both sides, with Gareth Bale introduced despite his future at the Bernabeu remaining unclear with Zidane apparently still determined to offload the Welsh forward.

And in keeping with the narrative, Bale poked home Real’s first goal after Martinez was challenged by Marco Asensio, with Arsenal’s pleas for a free-kick being waved away.

Asensio then struck the equaliser three minutes later as his fizzing effort proved too hot to handle for Martinez, though the playmaker’s match was cut short after he was soon stretchered off with a worrying injury which left him banging the turf in frustration at a potential layoff.

Bale then proved vital at the other end as he hooked a goal-bound Aubameyang drive off the line following a goalmouth scramble, while a cheeky curling effort with the outside of his left boot almost found the top corner 10 minutes from time.

Bale missed in the resulting penalty shootout, but Arsenal were woeful from 12 yards as Real won.