Arsenal take on Real Madrid in their final match of their USA tour and Unai Emery is expected to name the strongest side available to him for the International Champions Cup clash.

The likes of Mesut Ozil, Alexandre Lacazette and Sokratis Papastathopoulos are expected to return to the starting line-up against the Spanish giants at FedEx Field as Arsenal look to make it four wins from four Stateside.

Pierre-Emerick Aubameyang was left among the substitutes as he was carrying a minor injury that he suffered prior to the win over Bayern Munich but he is expected to be available for selection.

The boss has fielded predominantly youthful teams against the two weakest opponents we have faced on the tour – Colorado Rapids and Fiorentina – whilst against Bayern Munich Emery brought a string of more experienced options into the team.

It is also likely that Emery will deploy a 4-2-3-1 after using a back three in the 3-0 win over Fiorentina. When asked which of the systems he preferred the Spaniard insisted he wanted his Arsenal side to be able to play both but his subsequent comments also offered a clear indication of which he would prefer.

“Sead Kolasinac, I want to improve his performance in all but above all we’re working a lot with him and Ainsley [Maitland-Niles] to be strong defensively in a back four,” Emery said. “We are going to use this system, if not we can change because we can achieve the performance with another system.”

There will be few greater opportunities for Kolasinac and Maitland-Niles to learn than facing off against the likes of Eden Hazard, Vinicius Junior and Isco.

Though the starting XI is likely to be composed of senior players there will be several youngsters desperate to feature in some capacity and build on the outstanding form they have shown on the tour so far. Eddie Nketiah is its leading scorer with three goals and is well on course to feature off the bench. 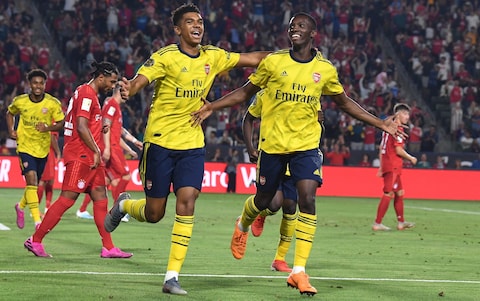 Joe Willock is also a strong contender to partner Granit Xhaka in midfield.